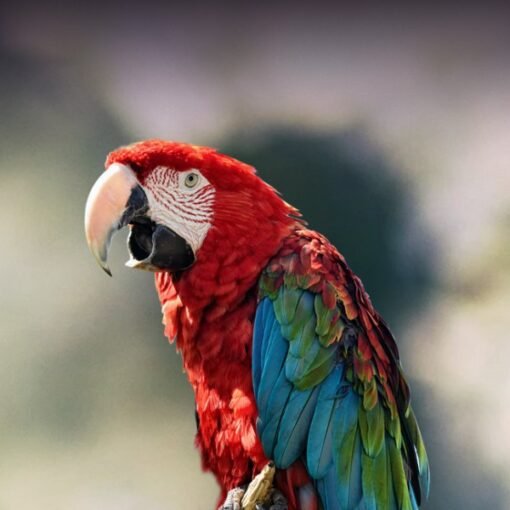 The green-wing macaw parrot can talk, but never a nuissance; instead, an owner can expect intermittent screaming, which is quite loud, but not persistent, that is, if the bird is being cared for properly and shown the required love and attention. Our green-wing macaw parrots get along with most other macaws, their size keeps them two together. It is advisable to Purchase a roomy cage with dimensions of at least 2.5×3 feet. Place robust perches inside the cage along with chew able fruit tree branches, replacing them occasionally with new ones, toys also need to be provided for your pet to maintain its mental enrichment and toys help their brain development. The bird must be let out of the cage to room freely for at least 3-4 hours per day. The red and green macaw can withstand temperatures ranging from 65°-78°F (18°-25°C). It may be alright with temperatures even lower, but only for short periods. They are quite lovable, sociable and intelligent. They are also rather inquisitive and will consider everything around the household a toy, be it a valuable possession of yours, or probably an electric wiring. They have the tendency to give back your moods back to you, if you are happy around it, it will be happy and vice versa.

The Green-winged macaw, known as the “Gentle Giant”,  is second in size only to the Hyacinth Macaw. The Green-winged macaw also known as the Red-and-green Macaw, is often mistaken for the Scarlet Macaw, another large macaw of the Ara genus, because of its predominant red feathering.  The breast of the Green-winged macaw is bright red, but the lower feathers of the wing are green.  Iridescent teal feathers are surrounded by red on the tail.  In addition, the Green-winged macaw has characteristic red lines around the eyes formed by rows of tiny feathers on the otherwise bare white skin patch; this is one of the biggest differences from a scarlet macaw to the casual viewer. It should be the obvious choice as a pet for someone looking to own a macaw.A full sized Green-winged macaw averages lengths up to 90cm (35.5in) with wingspans averaging approximately 102-122.5cm (41-49in).  Weights average approximately 1250-1700g (43.8-59.5oz or 2.75-3.75lbs).The Green-winged macaw generally mates for life.The female typically lays two or three eggs in the nest, incubates the eggs for about 28 days, and the chicks fledge from the nest about 90 days after hatching. The first down feathers appear around 8 days after hatching. The chicks open their eyes at around 15 days and the first feather sheaths emerge at about 3 weeks. Sexual maturity is reached at 3-4 years.

Our lovely, beautiful and adorable green-winged macaw is actually the gentler of the large macaws, not known for biting and massive mood swings. A well-raised green wing, one that’s healthy and well-treated, is a pleasant companion and long-time friend

The green-wing macaw is native to many of the tropical lowland forests of Central and South America, including Panama, Colombia, Venezuela, Ecuador, Guyana, Brazil, Peru, Suriname, French Guiana, Paraguay, Argentina, and Bolivia. It is found in virtually the same territory as the blue-and-gold macaw.

The green-wing, as well as other macaws, has been kept in captivity as far back as the 17th century, but captive breeding took off in the 19th century and was fortunately quite successful. Today, it is relatively easy to find green-wing macaws that were bred in captivity.

Nevertheless, like other tropical birds, this macaw has seen its natural habitat badly depleted, and many are still captured for the black market parrot trade. If you decide to adopt a greenwing macaw parrot, make sure you deal with a reputable breeder who can verify the bird’s status.

Green-wing macaws are one of the larger parrot species, with mature adults measuring up to 40 inches from the beak to the tip of the tail feathers, with a wingspan of up to 49 inches. The largest adults can weigh as much as 60 oz. (3.75 lbs.).

On average, a well-cared-for pet green-wing macaw will live for about 50 years, however, there have been reports of green-wing macaws living well into their 80s. Before you adopt one, make sure you’re willing to make a lifetime commitment—or have children who want to inherit the bird.

Those interested in adopting a green-wing macaw should keep in mind that these birds, however tame and affectionate they may seem, are still parrots and will behave like parrots. They get loud, and their screeching makes them unsuitable companions for those who live in an apartment or other close quarters. They are also avid chewers, and with beaks that are incredibly powerful, the potential for serious home damage or physical injury is present for a bird with behavioral problems.

The green-wing macaw is one of the most recognizable of all the parrot species. These bright birds are a deep rich red on the head, shoulders, and breast, with a greenish band below the shoulders and wings. The green band transitions to dark blue on the wings, and there is light blue on the rump and on the tail covert feathers. The long tail feathers are red, tipped in blue. The legs and feet are a deep gray, and the beak is horn-colored with a black lower mandible. The bird has eye patches on the face.

Males and females are indistinguishable, except that males are slightly larger. Greenwing Macaw Male Parrot

The pure drama of owning a huge greenwing macaw parrot can easily blind potential owners to the expense and time required. This bird may cost you much in terms of time, feed, equipment, veterinary bills, and possibly home repair costs. It’s best to be fully prepared for this before you adopt one and bring it into your home. Greenwing Macaw Male Parrot

This is not a bird commonly sold in pet stores, so you’ll need to seek out a breeder in order to purchase a green-wing macaw. And because the green-wing macaw demands a lot from owners, it is a bird that is frequently surrendered to animal adoption agencies and rescue organizations. There is an excellent chance of finding a bird at one of these organizations.

In the wild, green-wing macaws live in flocks of six to eight birds and are very social. Owners will need to spend plenty of time socializing with their pets. When you take a green-wing macaw into your home, you effectively become its “flock” and must include it in family activities. Green-wing macaws are highly responsive to training and must be given adequate attention and bonding time due to their social natures.Greenwing Macaw Male Parrot

This is important to remember, because a bored macaw is a destructive macaw. Green-wing macaws are known for being voracious chewers and can chew through a door frame or expensive molding with lightning speed. Green-wing macaws owners will need to invest in some good-quality chew toys and be ready to keep supplying them, as these are disposable items where macaws are concerned.

A large macaw such as a green-wing needs a roomy cage—2 1/2 feet x 3 feet at a minimum. The green-wing is a somewhat quieter bird than some of the other large macaws, but this is a relative term—it is still a loud species and it may be best to keep your pet in a room where the disturbance to neighbors will be minimal.Greenwing Macaw Male Parrot

Mount a sturdy perch in the cage, and be prepared to replace it occasionally as it gets damaged. Food, water, and treat dishes are best mounted above the perch on the side of the cage. Branches within the cage will offer the bird climbing exercise. Provide a variety of toys for chewing and playing. A playpen structure at the top of the cage is a good idea.

The green-wing macaw will also do well when kept in an outdoor aviary during warm weather, and also adapts well to an entire room dedicated as an indoor “bird room.”

Green-wing macaws, like all parrots, should consume a high-quality commercial seed and pellet mix in addition to daily servings of bird-safe fruits and vegetables. Most green-wings enjoy being hand-fed at the same time family meals are served. Green-wing macaws are known to eat some protein in the wild, and in captivity they will eat bits of cooked chicken.

As with all parrots, avocado and chocolate are toxic.

Although they are not as active as other large parrots, green-wing macaws still need plenty of exercise for both mental and physical stimulation, with about  2 to 3 hours of supervised out-of-cage playtime daily. Providing a separate playpen structure away from the cage will help occupy its time during these exercise periods.

Green-wing macaws, like other macaw species, are susceptible to some diseases, including:

Proventricular dilation disease (also called Macaw wasting disease), a viral disease that causes intestinal problems as well as neurological symptoms. It is usually fatal, and the best preventive measures are to keep the birds isolated from other birds that might carry the virus.
Psittacine beak-and-feather disease, a disease caused by a circovirus that kills the cells of the feather and beak and also compromises the immune system. It is usually fatal and is best prevented by making sure your bird has been properly quarantined before you buy it.
Psittocosis, a bacterial disease that causes respiratory symptoms and eye discharge. Stressed birds are most susceptible, and prompt treatment with antibiotics can often cure the disease.

Other problems that are less serious include allergies, and behavior problems such as feather plucking, which usually occurs in parrots that are bored or frustrated.