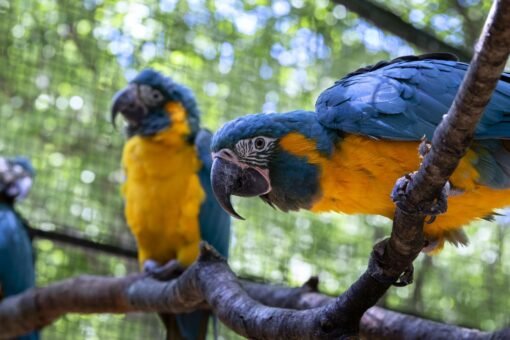 There are two areas inhabited by two sub-populations of Ara glaucogularis: one is to the northwest of Trinidad (the capital city of Beni), and the other is to the south of Trinidad. This separation may have occurred because of the indigenous peoples that historically inhabited this area and hunted blue-throated macaws to use the feathers in ornamental costume. This separation could also have been caused more recently by the wild-bird trade. With the high population of humans, any blue-throated macaws in the vicinity would have a higher chance of being caught. The formation of large human settlements in this area also resulted in a loss of suitable habitat and habitat fragmentation for this species. Hence, there are no blue-throated macaws in the vicinity of Trinidad. (Hesse and Duffield, 2000; Strem, 2008)

Blue-throated macaws inhabit gallery forests and islands of trees surrounded by a tropical savanna. Seasonal rains cause flooding from October to May and transform the savanna into a grassy swamp surrounding permanently dry elevated forest islands. The presence of Motacú palms (Attalea phalerata) is required for the survival of Ara glaucogularis as this species of macaw feeds and nests in these palms more than any other species of plant. They occur most often between the elevations of 200 and 300 m. (Benstead, et al., 2009; Hesse and Duffield, 2000; Jordan and Munn, 1993)

Most of blue-throated macaws’ habitat is used for cattle ranching. However, the land is unsuitable for cultivation, so habitat alteration for agricultural use does not occur. Although cattle will trample saplings, mature Motacú palms are very hardy and resist damage. This palm is somewhat fire resistant as well. As a result, Motacú palms often dominate the forest fragments in the Beni Savanna. (Hesse and Duffield, 2000)

Blue-throated macaws have very vivid coloration. They have bright turquoise-blue feathers covering their throat, crown, back and the dorsal side of their wings and tail. Golden-yellow feathers grow in a stripe between the blue crown and throat on the side of the face and on the ventral side of their body, wings and tail. On the face there is a sparsely feathered patch of skin near the base of the large dark-colored bill that has 5 or 6 horizontal stripes of blue feathers which are unique for every blue-throated macaw and can be used to individually identify adults. The skin on this patch is predominantly white with a pink tint close to the bill. (Benstead, et al., 2009; Kyle, 2007a)

Adult blue-throated macaws’ mass ranges from 600 to 1000 g with a length of about 85 cm (measured from the top of the head to tip of the long, tapered tail) and a wingspan of approximately three feet or 0.9 m. Ara glaucogularis shows little easily observable sexual dimorphism; however, males tend to be a little bigger than females with approximate masses of 600 g and 800 g respectively. (Benstead, et al., 2009; Clubb, 1994; Clubb, 2009; Kyle, 2007a)

Newly hatched blue-throated macaws are completely pink and have no feathers. Gray down grows in as they age, and is later replaced by colored, fully-developed feathers. The iris also changes color with age. The eye color of a nestling is initially black and changes to brown soon after the eyes open. When the macaaw is one to three years old, its eyes will turn grey, then white. As the macaw matures, the iris turns yellow and will be more golden at 10 years and will become a richer gold with age. Elderly macaws show a ring of dark grey surrounding the pupil where the iris has become thinner and the back of the retina shows through. This continuum of the iris’ colour can be used to estimate the age of a macaw. (Clubb, 1994; Clubb, 2009; Kyle, 2007b)

Polymorphisms, seasonal and geographical variations have not been observed in blue-throated macaws.

Be the first to review “Blue Throated Macaw Pairs”Cancel Reply