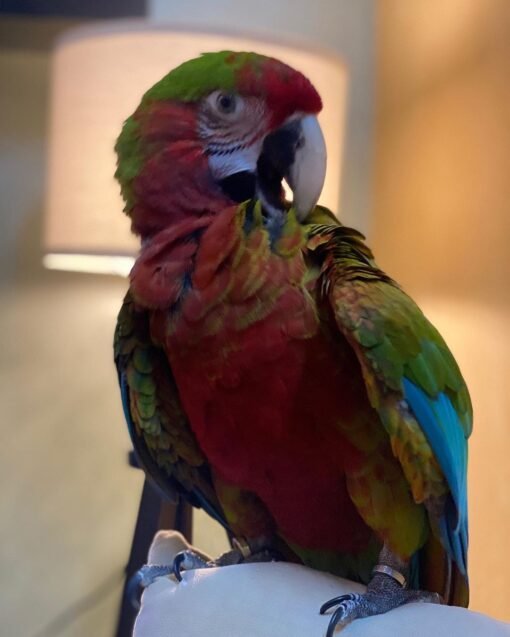 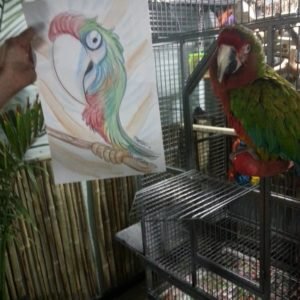 Besides being a very gorgeous bird, the Calico Macaw’ s parentage lends itself to giving this bird a very gentle and affectionate personality!

“Hemingway” is a Calico Macaw with the parents being a Green-winged Macaw and a Military Macaw. At only three month old Hemingway is still just a youngster. Hybrid macaws will inherit the personalities of both the parents. In the case of a Calico Macaw like Hemingway, this makes for a very sweet, affectionate, and captivating pet.

Hybrid macaws are bred for color. The Calico Macaw is a first generation hybrid macaw, meaning its parents are two species of naturally occurring macaws.The Green-winged Macaw has been has long been a favorite pet bird for both its beauty and its good personality. The Military Macaw is also a favorite with a good temperament, very trainable and highly intelligent.

Because hybrid macaws are a mixture of more than one type of macaw, the offspring are influenced by the traits and characteristics of both of its parents. Father’s have the dominant gene, so this will generally influence the offspring’s coloration and overall appearance. However the behavior and temperament are more unpredictable.

The parentage of the Calico Macaw is a good mix for a pet bird, a hybrid parrot that is very attractive. With the intelligence and temperament of it parents, it should also be quite trainable, learn to talk and do tricks, and have an amiable nature. As with all macaws, they will require good socialization and consistent training to make good pets.

Scientific name:   The Calico Macaw is a first generation hybrid macaw. It is a cross between a Green-winged Macaw Ara chloroptera and a Military Macaw Ara militaris.

Distribution:   ThIs is a captive bred hybrid macaw. Hybrid macaws are rarely found in the wild.

Description:   Calico Macaws are a very colorful hybrid.  Both parents of the Calico Macaw contribute to the striking colors of their offspring, though the father’s have the dominant gene and this will influence their final appearance.
Most often the father is a Green-winged (male Green-winged macaws are more common than females). Some of the characteristics when sired by a Green-winged macaw will be a large bird, with the head and beak shape more typical of the Green-winged. These macaws have a green back with a bronze cast similar to the Military Macaw, but will have a deep red chest and belly.

Care and feeding:   A roomy cage is required unless the bird is to be let out for extended periods. Many birds can spend most of their time on a play pen or parrot perch. They eat a variety of seeds, nuts, fruits, and commercial pellets, as well as the same nutritional foods humans eat. See About Macaws: Housing and About Macaws: Care and Feeding for more information.

Social Behaviors:   Calico Macaws socialize and bond closely with one person but do well in a family situation also. They are a typical macaw and can be cranky at times. To have a well rounded bird that enjoys more that one person, make sure it is well socialized with lots of folks. See About Macaws: Social Behaviors for information on developing a well rounded friendly macaw. (Also information on handling and activities)

Breeding/Reproduction:   This is a hybrid and it use to be that they were generally not bred, however the breeding of hybrids is becoming more common. See About Macaws: Macaw Breeding, Bird Reproduction – Baby Macaws for information on breeding macaws.

Availability:   This bird is only occasionally available. There are more and more macaw breeders however, so finding these macaws for sale becomes easier as they become more common.

Be the first to review “Calico Macaw Parrot”Cancel Reply